November 5th, 2019
If you have tuned in to follow the drama of World Championships or the World Cup you have most likely heard the voice of Katherine Bett.

Although most people might not think of the commentator as a designer, they certainly play an important role in how the viewer perceives what is going on in the race. This becomes very clear if you have ever watched a sports broadcast without a commentator. There is no question that a voiceover that breaks down the action adds to the experience. But what signifies a good orienteering commentator? We wanted to talk to Katherine to try and dig deeper into this question and what she thinks of the development of the sport.

How did you get started as an orienteering commentator?

My grandpa (Clive Allen) has been commentating on races for a long time, and when the World Championships came to Scotland in 2015, he asked me if I wanted to help. I was doing student radio at the time and said I’d give it a go. Throughout the week, I spoke more and more, and have done every single WOC since. 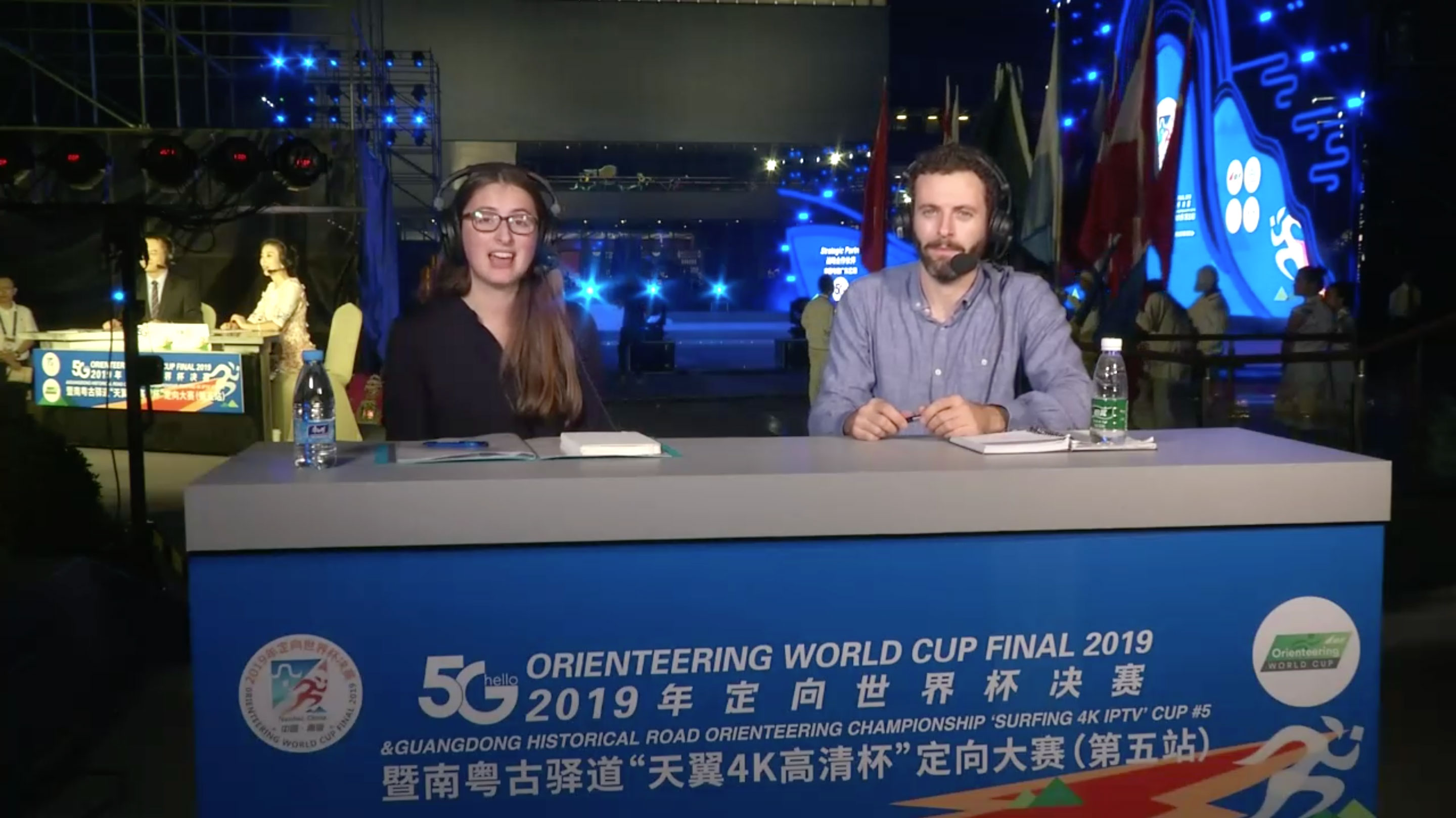 Katherine commenting at the World Cup final in China

What is your favorite race format as a commentator?

My favorite is the middle distance. Often the nature of the course means we can talk a lot about very technical parts of orienteering. Having pre-run the courses, we can guess why people made certain micro-route choices, explain why people might have made a mistake, and describe the terrain in detail. It’s more interesting than the long-distance, where the focus is often on route choice where there are only a few options. There’s also more time to go into detail than the sprints. We’ve also seen some drama in middle distance races, for example when Tove Alexandersson had a disaster in the 2018 WOC middle. The margins are often quite tight, and there’s always a good story to tell.

Impressions of the knock-out sprint?

Like many, I have been a bit uncertain about the format, but the World Cup in Switzerland showed how good it can be. In my opinion, the knock-out sprint needs both a good area and a good course setter to make it work. In Switzerland, we had both and could tell that the athletes were actually orienteering around the course, rather than just following each other. The athletes choice section at the start forced the runners to run fast from the beginning and there was an opportunity to take a risk at the end of the course - something that Ralph Street was able to take advantage of and progress to the final.

One of my concerns about the format was whether it would be too similar to the “classic” sprint and whether we’d see the same people winning the sprint medals. However, there does seem to be a significant difference between running by yourself and running with a group. The ones who will succeed in this format will be those who can cope with others distracting them - they will use the others when necessary and also know when to do their own thing. Another skill is being able to deal with four races in one day. The races, plus warm-up and recovery in between can add up to 30km. And this specialism is showing - we’ve already seen Vojtech Kral win both of the knock-out sprints that were part of the World Cup. It’ll be interesting to see how tactics develop in the next few years as the orienteers train and race more knock-out sprints.

What is the biggest part of your job?

I’d say the most crucial part of my job is interpreting what’s going on in the race and telling a good story. I want to try and get the overall picture of how and why someone won... Whether that’s because they were good on the long legs, they were free of major mistakes, or they were just quicker. I want to be able to make the detail of a three-hour broadcast into something understandable. And then I’m always happy if I’ve managed to pick up most of the things that later appear in Jan Kochbach’s analysis on World of O.

Unlike the national broadcasters who make their programs for a very mixed (and mostly non-orienteering) audience, we have assumed that most of our audience knows something about orienteering. Therefore we don’t ever explain what the sport is on a basic level. However, this audience still varies from a club runner who doesn’t know anything about elite orienteering, to the elites (or former elites) themselves. This is why I think it’s very important that both commentators that work on the programme know a lot about orienteering. I take on the main commentator role, whilst Jonas Merz is the expert commentator. He has experience of competing at a higher level and knows a lot of the athletes. This allows us to discuss a lot of detail for the fanatics, but I can also ask him questions like “what’s it like in quarantine?”, “How have people prepared?” and “how do people decide on a route choice?”, which can help make the World Cups accessible for club orienteers. For all types of viewer, I think it’s the detail that makes the broadcast interesting, and if we can explain that in an accessible way, then we’ve done a good job.

I now know a lot more about the lifestyle and mindset of elite orienteers, for example how people prioritise and train for different races. I have learned what it's like to orienteer in terrain around the world, and from pre-running the courses, I have a greater appreciation for how elite orienteers can execute great performances in so many different types of terrain.

Another thing that I take into consideration is my use of language. The audience is a very international one, and I have discovered that “International Orienteering English” can be quite different from terms I use at home in the UK. For example, in the UK I’d say “course planner”, when most people internationally say “course setter”. Similarly, I’d say “gaffling”, when the accepted international term is “forking”. But, hopefully, as a native English speaker, my accent is easy to understand and I can still convey a lot of meaning with my enthusiasm.

What kind of preparations do you make ahead of time?

I keep a spreadsheet with details of all the international runners, which I update after major events. This means I can have information at hand about how many medals people have won, and when their best performance in a particular discipline was. I also like to remind myself of who won major medals recently and mark these on the startlists. Following athletes on social media, also helps me keep up to date with what they're doing.

As well as pre-running the races, I have copies of the maps in front of me during commentary and like to mark on the camera points and the radio controls. This means I can inform viewers that TV control 1 is control 7 on the map - hopefully helping those who are keeping an eye on the GPS too. 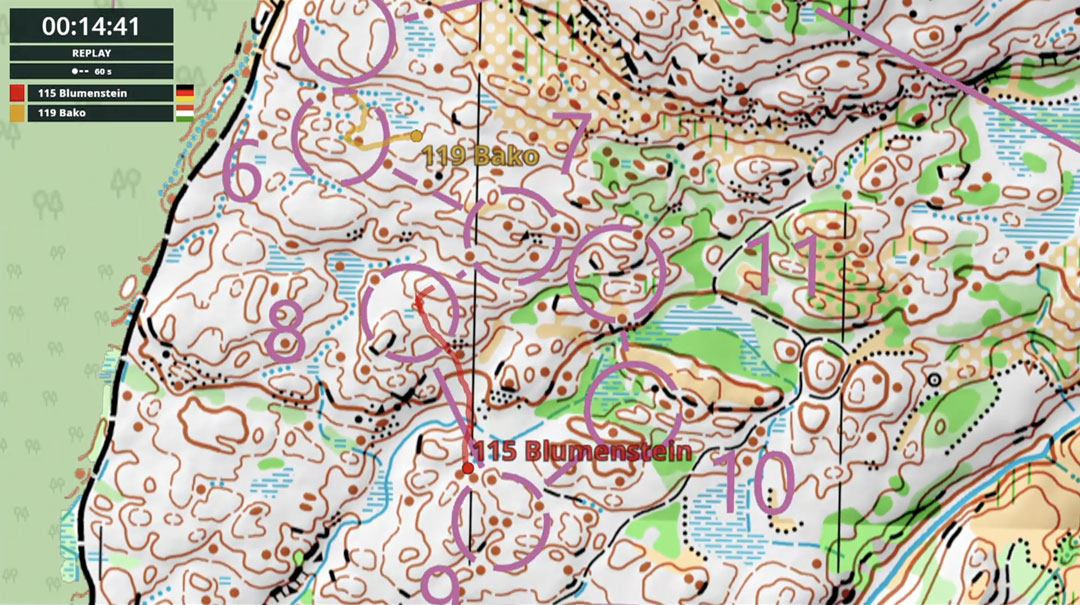 What is the biggest hurdle of today's broadcasts?

I think the biggest issue is getting enough people to watch. And of course, there is no easy solution to this. I’m not an expert in this, but the IOF’s responsibility is to find the right approach to get lots of viewers and ensure the broadcast is cost-effective. A lot of work has been going on in the past few years to make the quality of the World Cup broadcasts a lot higher and more consistent. We’re also thinking about how we can add something ‘extra’ to the broadcasts so that people feel their subscription fee was worthwhile. And then we need to make sure more people know this and choose to watch.

What kind of response have you been getting from your work?

I’ve certainly been getting some great responses from people I meet at events in the UK. I enjoy comments like “we’ve been hearing you coming from our living room”, especially when it’s juniors watching. One of my biggest aims, particularly with UK audiences, is to make them understand and enjoy the elite races - orienteering is more than just going around a local forest on a Sunday morning.

It’s also really nice when some of the elite athletes compliment your work. If they feel that I have understood and communicated their race effectively, then that is high praise indeed.

In June, British team member Will Gardner and I launched The Run In podcast. Every episode, we have a really in-depth interview with an orienteer and find out what makes them tick. I found that a lot of the interviews in the UK were very short and just about races, but what we do allows our audience to really get to know some of the key orienteers in the UK. We also recap major events and preview upcoming races.

What do you when not orienteering?

I freelance as a broadcast journalist and commentator. That means a mixture of commentating (Foot O, MTBO SkiO, athletics), working on local radio, athletics productions, and shooting social media videos.

Who do you think we should interview next?

Continuing on the broadcasting theme, you should interview Karel Jonak, who directs most of the World Championships broadcasts and has also been involved in making the World Cup broadcasts more consistent. His job involves a significant amount of design, from planning camera positions and sequences to putting together the whole running order of the production. 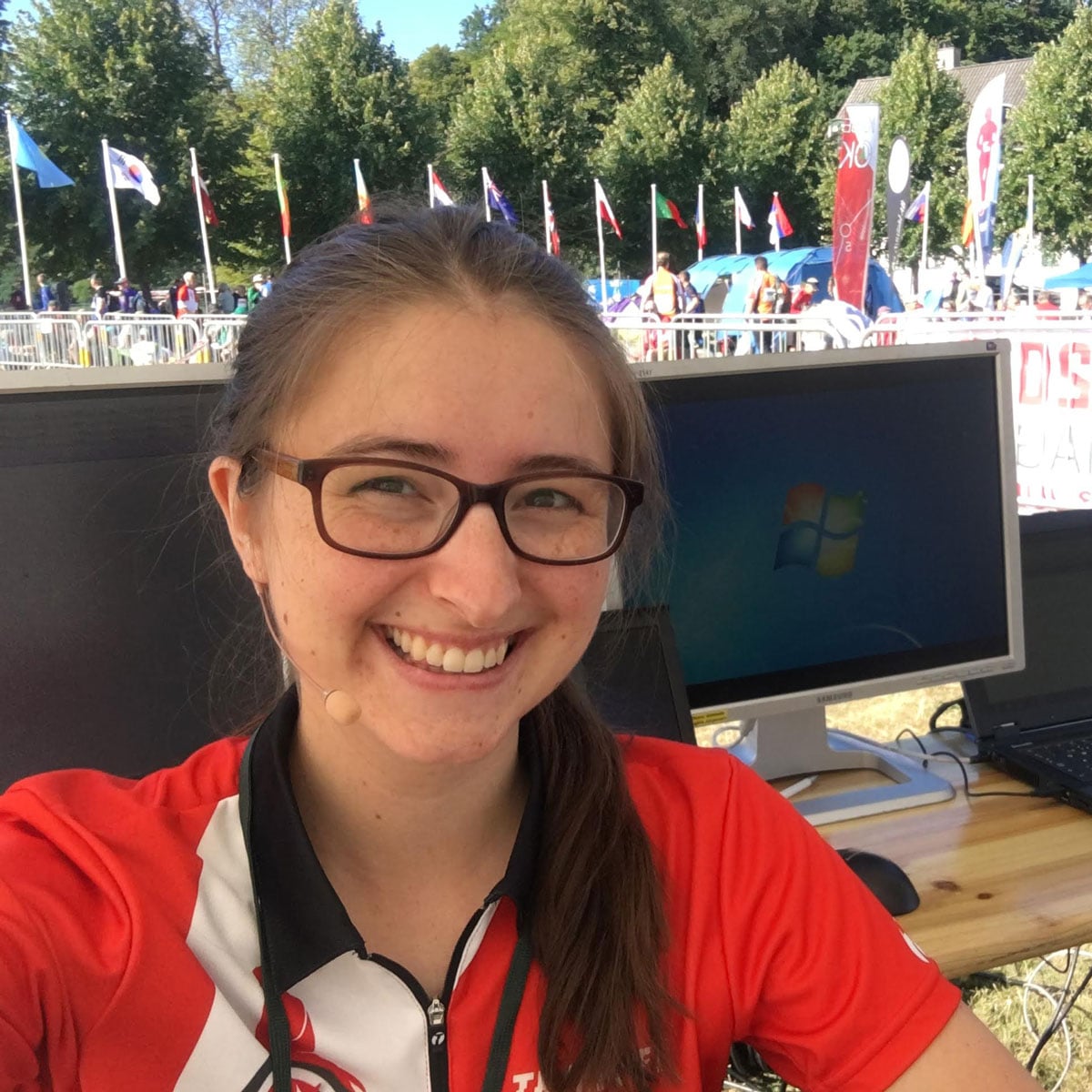