October 2nd, 2019
The advancement of technology has brought the GPS to our wrist and our pockets. For a sport that is all about navigating it is quite understandable that this technology can have a great impact on the sport.

Luckily we have enthusiastic people who don't get stuck on the possible negative aspects of having new technology shape our surroundings but to see the opportunities. Petri Tilli took the chance to build upon the work of others to create an app that gives runners the opportunity to analyze their GPS tracks on the go with their phones. Either logged directly with the phone, GPS watch or on the newer Apple watches.

Tell us about yourself...

I am Petri Tilli, aged 42 from Helsinki, Finland. I do software development, been doing that almost 20 years now. Been orienteering roughly since 1998 when my hometown club Ylämaan Pyrkijät asked me to participate in Jukola relay in Siuntio in their 2nd team. I practiced 2 times and then they put me to the final leg of Jukola. :) Managed to make it through and been in Jukola with them ever since.

Nowadays we have only one team and we usually finish in places 400–500. I haven’t ever been a particularly great runner, but something in the orienteering sport bit me in my first Jukola and I just needed to continue doing it. I tried to do some long-distance running, marathons and sorts but didn’t really like that. But when I got the challenge of finding control points in the middle of a forest, I started immediately digging that.

How did you come up with the idea for Control App?

Well, I liked and still like Mats Troeng’s excellent QuickRoute app for orienteering analyzation. But the thing is, I have been a Mac user since 2006 and had usually a bit of trouble of running that app on my Mac. Also, the development of QuickRoute seemed to halt at some point, it just didn’t progress at all.

Then in 2011–2012 I really got into iOS app development. I started playing around with this idea in my head that how could I myself develop something like QuickRoute but for Mac. And then it started dawning to me that I don’t really want to do it for the Mac but iPhone and iPad. Because that is what I know and the mobile phone is the personal computer that you have with you everywhere. Also, Apple introduced the Apple Watch which I started picturing as the perfect orienteering companion watch -especially once they added GPS to it in the 2nd generation.

So, in the summer of 2016, I started working on the iPhone app and the Apple Watch app to be these perfect orienteering tracker & analyzing apps. I don’t remember when I first started playing around with this idea but it was quite a long time ago before its release in the spring of 2018.

What kind of response have you been getting?

Orienteering people seem to really like the app and those people who have installed it seem to use it heavily. That feels really good to me as a developer. As an orienteer myself, I have been trying to make the app for myself and my needs.

It feels great to see that other people use it as well and seem to like it: the app is rated mostly 4–5 stars in the App Store. The biggest praise as a developer I got from Apple in June 2018 when Apple featured Control in the “New apps we love” section of the App Store. That felt like I have reached the pinnacle of my career so far. :)

Is there anything that you are especially proud of?

I think there are two things: design-wise the biggest thing I have done is the route scrubber. I mean the swipe-able thing at the bottom when you select a point from the route. I really liked the way it turned out. Maybe some improvements are still needed but nevertheless, it functions very much how I envisioned it to.

Another thing, development-wise big thing was the actual map image/route calibration. That was tuned and fine-tuned for a long time, maybe a year. I had many ideas which turned out bad until I actually came up with the current way which is very much like the QuickRoute way of calibrating the route on an orienteering map. There was lots of head-scratching until that was done.

What is the next in the orienteering community?

I would like to see orienteering sport becoming more popular. We are still not in the Olympics! Sprint races in city centers show that this sport can be practiced anywhere so it should be taken everywhere.

What do you when not orienteering?

I work as a full-time software developer, working in client projects everywhere, ranging from media apps to financial/banking to sports apps. Control app is not giving me enough money yet to be my main source of income. That is my dream, though. In my free time, I try to keep up with my 2 daughters and their hobbies. They are aged 4 and 7. I have tried to introduce orienteering to them but with no significant luck yet.

Who do you think we should interview next?

Well if you haven’t, I would suggest Mats Troeng, he is quite a legend in the orienteering software world. And I think also better orienteer than me! 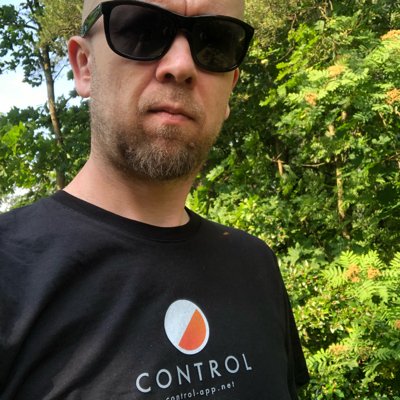 A big thank you to Petri Tilli (@piidro) for answering our questions!
You can find out more about his project at control-app.net